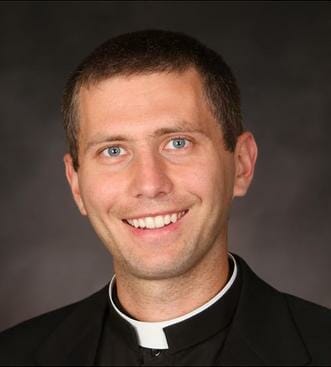 Want to meet Father Matt?
Contact us to set up a meeting!

Father Matt Shireman has been appointed by Archbishop Hebda as the Parochial Administrator for the parishes of St. Gregory the Great in North Branch and Sacred Heart church in Rush City. This is his first time being in charge of a parish and he is starting his new position on July 1, 2022.

He was ordained a priest for the St. Paul and Minneapolis Archdiocese on May 26, 2018, and in his first four years of priesthood he has had several priest mentors.  His first priestly assignment was at St. Stephen’s Church and School in Anoka where he was a deacon and had his first year as a priest.  He was able to get to know St. Stephen’s quite well through the 15 months he was there.  Fr. Matt was then assigned as Parochial Vicar (Assistant Pastor) to St. Elizabeth Ann Seton Church and School in Hastings where he worked with Fr. Dave Hennen.

Fr. Matt Shireman is the middle child of Mark and Annette Shireman, who still live in Minnesota. He has an older brother and a younger sister. He graduated from Minnetonka High School in 2004. After graduating from High School, he attended Marquette University and received a B.S. in Civil Engineering. He also has a Master of Science in Transportation from MIT. He worked a total of 8 months at the transit agency in Cleveland, Ohio, helping to schedule the buses and trains. Through discernment and reflection, he left his job there to enter seminary in fall of 2011.  His seminary studies were at the St. Paul Seminary School of Divinity at the University of Saint Thomas.

He has been involved in many aspects of ministry during his time as a priest.  He especially liked visiting and teaching the students at the parish schools where he was assigned.  Some of the highlights that Fr. Matt enjoys as a priest are celebrating Mass, being an instrument of God’s mercy in Confession, and bringing healing to the sick and dying through the Anointing of the Sick.  In April 2020, Fr. Matt became a COVID Anointing Corps Priest along with 12 other priests from the Archdiocese.

There are several other parishes in the Archdiocese in which he has connections including Good Shepherd in Golden Valley (his place of baptism), St. Therese in Deephaven/ Minnetonka (his home parish), and St. Victoria in Victoria (his teaching parish). Some of his hobbies include running, reading, trying new restaurants, going to amusement parks, following sports, and playing the French Horn.

Fr. Matt has appeared on a couple of radio programs.  The first is an interview about the Covid Anointing Corp on RPR Network (Real Presence Radio) in Fargo, ND, and the second is an interview about his new assignment at St. Gregory the Great and Sacred Heart parishes on KDWA in Hastings. He is also considered the “Theme Park Priest” where he keeps a blog about the many theme parks he has visited.